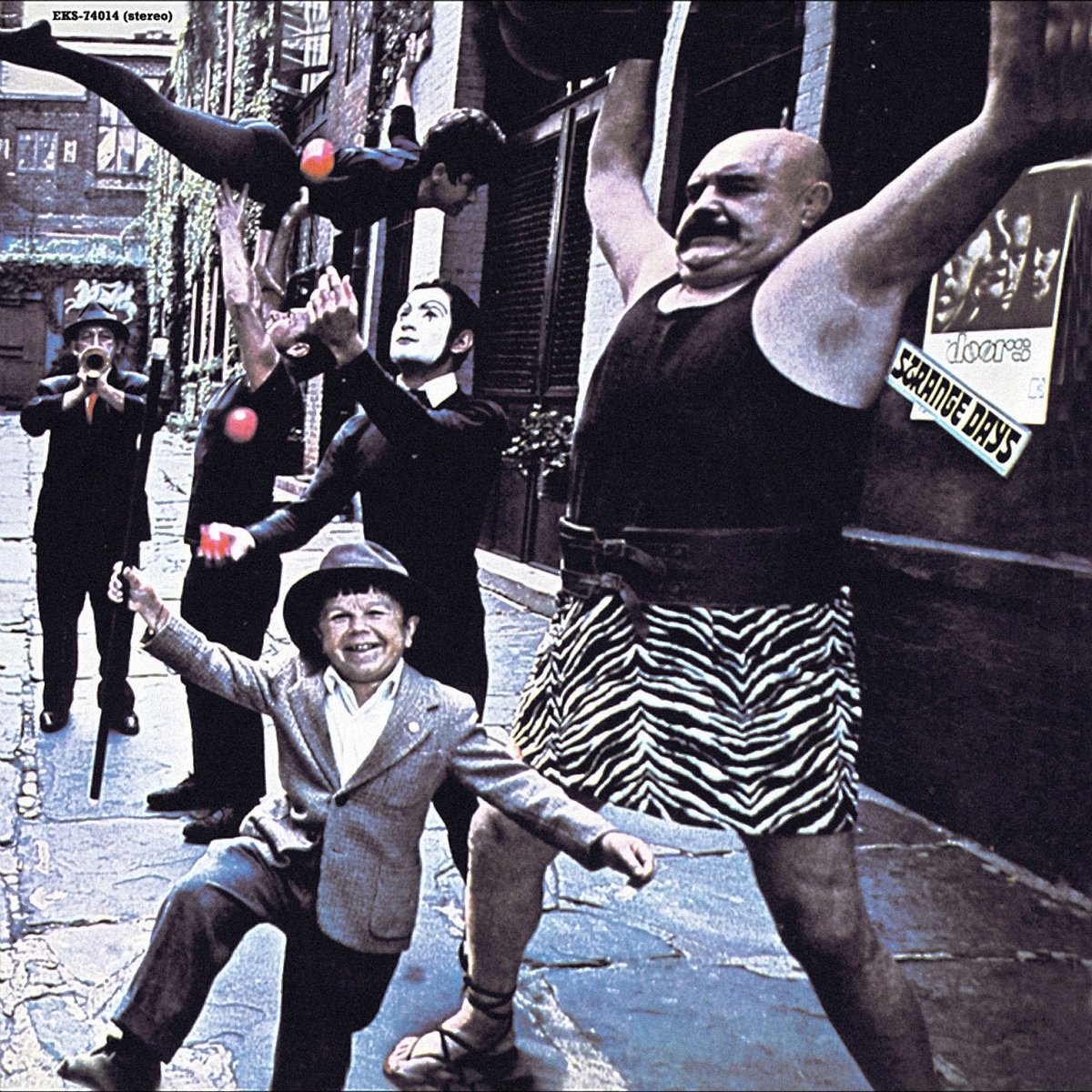 “If the doors of perception were cleansed, everything would appear to man as it is, infinite. For man has closed himself up, till  he sees all things through narrow
chinks of his cavern.” William Blake from “The Marriage of Heaven and Hell”

The Doors formed in 1965, in Los Angeles, signing in 1966 with folk-music label, Elektra, after Columbia failed to secure a producer for their first album.  Their name was inspired by Aldous Huxley’s book “The Doors of Perception”, which recounts Huxley’s mescaline experiences and borrows its title from the William Blake poem, “The Marriage of Heaven and Hell.”  This first album of theirs was released in January of 1967.

The album opens up with a promise, premise and pronouncement to “Break On Through to the Other Side.”  This first track, as do many on the album,  opens up in layer by layer (instrument by instrument) with John Densmore ‘s drums, staggered bass in first the left (guitar bass line) and then right channel (keyboard bass line), Jim Morrison’s vocals, Robby Krieger‘s  guitar and eventually Ray Manzarek‘s organ setting a standard of expectation for the rest of the album. Less than 2 1/2 minutes, the track is over — just the right length — leaving the listener hungry for more.

This album, in general, is dark, emphatic, reflective, well-thought out and a precursor to later American heavy metal (Iron Butterfly, Steppenwolf, and to some degree even bands like Blue Oyster Cult.)  Much of the music is blues-based, some adhering closely to that foundation (“Back Door Man”), some straying quite far but keeping the essence of the three chord pattern (“Soul Kitchen”) and some seemingly far removed but yet still with a blues essence. Within this wide range, all of this music has a freshness and originality to it, sometimes provided by Kreiger’s distillation of late sixties guitar, sometimes by Manzarek’s often ornate keyboards and sometimes from the overall arrangement.

Not enough can be said about “Break On Through to the Other Side”, and so I will say no more.

“Soul Kitchen” is a sexy, bouncy bluesy piece, with what was in 1967 pretty explicit lyrics. “The Crystal Ship” is lyrical, dramatic, intimate and in a minor key with a mystically evocative keyboard section.  “Twentieth Century Fox” is a clever title, not about a movie studio, but of course, to the “fashionably lean” “queen of cool” in-control modern woman well described in the lyrics:

“No tears, no fears,
No ruined years, no clocks;
She’s a twentieth century fox, oh yeah!”

The fifth track, “Alabama Song” is from the Kurt Weill opera Rise and Fall of the City of Mahagonny ( Bertolt Brecht lyrics) and I suspect the lion’s share of arrangement credit goes to Manzarek who plays the zither-like marxophone and keyboards. Note that nearly ever-present, oompah-oompah, ironic lilt — the essence of which resurfaces in at least a couple of 1970’s English progressive rock albums.

Not much needs to be said about “Light My Fire”, thanks goodness, for words poorly can capture the spirit of this song, it’s historic, seamlessly interwoven blend of jazz, baroque and rock elements, and its influence on early metal and early progressive rock bands.

“Back Door Man” is pure blues, written by  Willie Dixon and previously known for the 1960 Howlin’ Wolf version.  “Back Door” is a prominent reference in earlier blues music and refers to sneaking in the back door of a house when the unsuspecting husband is at work or out and about.

“I Looked at You” is another song that starts by adding layers.  It is almost a prototypical mid-sixties go-go dance number until that first brief detour (modulation at “cause it’s too late”), quickly shifting back to its initial state (“we’re on our way and we can’t turn back”) with a wonderful go-go style organ that follows. Here again we have a hint of baroque music embedded in what is essentially sixties pop.

“End of Night”, a soothing minor/modal ballad in the midst of more stormy tracks,  begins with a hint of spooky, Bartok-like nacht-musik into a leisurely blend of guitar and Morrison vocals.

“Take It as It Comes” starts with no introduction, appropriate to both the title and opening words of “Time to live.” It starts of with a e minor seventh chord which effectively creates the drive and resulting uplift for the next section (modulation to A minor at “Take it easy, baby. Take it as it comes”) and the short baroque-like organ solo.  A second ornate organ solo is followed by more vocals from Morrison (“Go real slow. You like it more and more. Take it as it comes. Specialize in havin’ fun”) and a quick, final flourish to end.

“The End” attempts to rise up to the height of the opening track, and would come very close, with its tender opening and exotic, Indian-influenced (voiced by guitar), expansive instrumental section.  The trouble is that after a few minutes, Morrison’s mumbling detracts from otherwise meditative, highly spiritual music.  Granted, Morrison is reaching for the furthest corners of personal discovery, but the track would have worked better if he stopped after the melancholic exposition:

which sets up the remaining instrumental exploration and inner-reflection nicely.

That said, this Morrison self-indulgence is only a minor weakness and doesn’t detract from the excellence and revolutionary nature of this album. When we talk about drugs, sex, and rock and roll, this album encompasses all three: from the name of the band, to the surprisingly suggestive lyrics (common enough for blues, but not so common for the mass media of 1967), to the self-assertive, unapologetic, counter-culture music.

All tracks written by the Doors (Jim Morrison, Ray Manzarek, Robby Krieger, and John Densmore), except where noted.

All tracks written by the Doors (Jim Morrison, Ray Manzarek, Robby Krieger, and John Densmore), except where noted.