Gustav Mahler’s sixth symphony was first performed in May 1906 by the composer. Interestingly, Mahler performed the movements in a different order (Allegro, Andante, Scherzo, Finale) than the order in the version published two months earlier. What apparently occurred was that Mahler, during rehearsals, decided that the symphony worked better if the second and third movements were swapped, placing the scherzo in its historically more traditional place after a slow second movement and before the last movement. Mahler notified his publisher to put out a second edition with the new order of Allegro, Andante, Scherzo and Finale and to include errata additions to unsold copies of the first edition.

For the next few decades, Mahler’s sixth was performed with the Scherzo following that Andante slow movement.  Then in the 1950s the first editor of the Critical Edition of Mahler’s works, Erwin Ratz,  came to the conclusion that Mahler had got it right originally and that despite Mahler always conducting the Sixth with the Scherzo after the Andante, that the correct order should be with the Scherzo before the Andante. Without any solid supporting evidence, Ratz, when finalizing the “authoritative” Critical Edition of the Sixth Symphony in 1963, stated in the preface that Mahler had meant to revert to the original order as represented by the first edition, but did not (as Mahler had died in 1911.)

Turns out we now know that Ratz had falsified evidence to support what probably was a personal conclusion based on his analysis of the score.  The Scherzo shares thematic material with the first movement as well as tonal orientation.  Analysis may support a view that Mahler wrote the piece to be performed in the order Ratz proposes, but composers certainly are allowed to make changes, as Mahler not only did to the order, but to the score itself,  and Mahler, known for revising his published works, probably would have made further changes over time if he had lived longer.

In 1998, the latest Critical Edition of the Sixth was released, with the Ratz error still in place, but then in 2004, The Kaplan Foundation published a paper including an essay by recording engineer Jerry Bruck and an essay by Reinhold Kubik, the new chief editor of the Mahler Critical Edition. overturning the Ratz order of Scherzo before Andante and refuting Ratz’s assertion.

Thus with a few exceptions, all recordings between 1961 and around 2000 or so, have the Scherzo occurring before the Andante.  One notable exception is the live January 1966 Berlin Philharmonic recording conducted by Sir John Barbirolli and the live August 16 1967 and the August 1967 studio recording performed by New Philharmonia Orchestra and also conducted by  Sir John Barbirolli.

Performing a complex work like Mahler’s Sixth demands serious study of the score. It is not a work that easily comes together into a comprehensible whole.  For this work to sound like a single unified piece with an overall logic and message, it requires a major commitment by any conductor.  Barbirolli was indeed very serious in his study of this work.  Perhaps it was through such score analysis that led to Barbirolli’s decision to put the Scherzo after the Andante. Perhaps he realized that the Andante provided the necessary contrast, release of tension, and proper overall flow when coming between the opening movement and the scherzo.

When these recordings where first issued, the two live version had the movements in the order they were performed, but for the August 1967 studio version, EMI reversed the order of the middle movements to place the Scherzo back earlier as was indicated in the erroneous critical edition.  Reportedly, Barbirolli was more disappointed then angry at this, but thankfully, current CDs of this studio version have the Scherzo properly placed as the third movement as performed originally and consistently by both Mahler and Barbirolli.

There are only a few recordings of the sixth undertaken before these three Barbirolli recordings in 1966 and 1967.  Since 1967 there have been several dozen recordings, most of these occurring in the CD era.  For those recordings made in the last forty years of the twentieth century where the Scherzo was performed before the Andante, one might just be tempted to program the CD to play these in the proper order, but this doesn’t quite work so well as each of these conductors crafted an overall performance architecture to work around an earlier placed Scherzo.  In my opinion, switching the order, just makes these performances less logical and cohesive, not more.

Of the two 1967 Barbirolli recordings, both are worth a listen, and the notable differences are as follows:

This 1967 Live recording may suffer slightly in comparison to more recent recordings of Mahler’s Sixth, but historically, one has to love how Sir John Barbirolli not only took on what was then a vastly underappreciated work, but got so much right in performing this work. 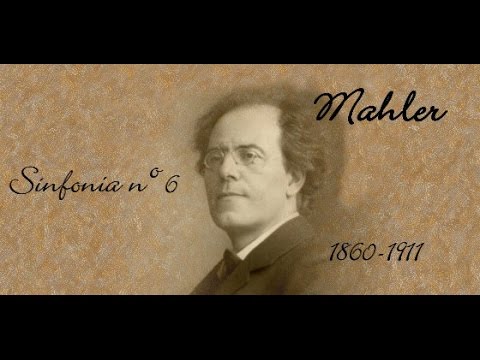 Recorded in February and Novemeber 1964 at two venues (with the orchestra changing its name from “Philharmonia” to “New Philharmonia” in between) and released in 1967 on a 2 LP set along with five songs from two different Mahler works (two songs from “Des Knaben Wunderhorn” and three of five songs from “Rückert-Lieder”) this was the best recording of Gustav Mahler’s “Das Lied Von Der Erde” found in college music libraries in the 1970s, where music majors like me often went to listen to such works as part of their music history studies. This recording captures the music with detail and beauty, presenting a relatively forward plane of sound such that solos are clear and both singers are placed in front and not lost amidst a large orchestra. It is a real joy to listen to on a good audio system with the clarinet, oboe and flute lines distinct and luminously clear  throughout and the two soloists balanced so well against their orchestral accompaniment.

There is no disputing the importance or quality of what many consider to be Mahler’s greatest work.  Composed in 1908, it was written after 1) Mahler had suffered through the politics of hatred and antisemitism that forced him to resign as director of the Vienna Court Opera, after 2) Mahler learned that he had a fatal heart condition, probably a congenital defect that had claimed the lives of his little brother and later his mother, and, 3) worse than either of these for any parent, the loss of his five-year-old daughter, Maria to scarlet fever and diptheria.

“With one stroke,” he wrote to his friend Bruno Walter, “I have lost everything I have gained in terms of who I thought I was, and have to learn my first steps again like a newborn”.

“The wine beckons in golden goblets
but drink not yet; first I’ll sing you a song.
The song of sorrow shall ring laughingly in your soul.
When the sorrow comes, blasted lie the gardens of the soul,
wither and perish joy and singing.
Dark is life, dark is death!”

Mahler’s “Song of the Earth” is a work one can repeatedly listen to,  absorbing the sparkling, transitory joy, the moments of anguish, despair, and bleak, unshakable sorrow, and the spiritual sophistication and beauty of Mahler’s chromatically extended tonality.  Of all the recordings out there, this 1967 classic recording by Klemperer, the Philharmonia Orchestra/New Philharmonia Orchestra, Christa Ludwig, and Fritz Wunderlich is a perfect place to start or return to, depending how many times you have listened to “Das Lied Von Der Erde.”  Otto Klemperer was one of the few conductors who actually knew Gustav Mahler, heard Mahler conduct, and survived into the age of stereo to record him.  Perhaps this is the closest to hearing how Mahler would have recorded this work.

Thoughtful Thursday: What to observe?

Thoughtful Thursday: Past, Present and Future