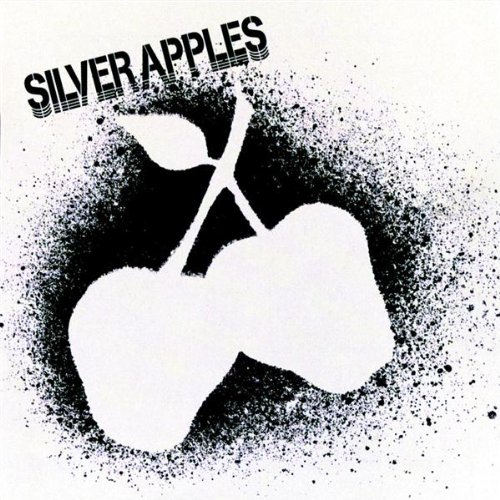 Silver Apples was what was left of the cover band, The Overland Stage Electric Band, after vocalist, Simeon Coxe III,  incorporated old-fashioned 1940’s technology audio oscillators into their performances at Café Wah in Greenwich Village, annoying, exasperating, and eventually alienating all other members of the band except the drummer, Danny Taylor.  Now, with only two of the five original members still on board, the band was renamed and, with a set of thirteen oscillators connected together, soon recorded an album for the small label, Kapp, which had recently been purchased by MCI after Kapp had repeatedly proved itself, including recording Louis Armstrong’s very successful single, “Hello Dolly”, in 1964 and recording the original cast album of “Man of La Mancha” in 1966.

For those that would propose that all the new music in any decade following the sixties is truly based on something already recorded prior to 1970, this first Silver Apples album, Silver Apples,  makes a good exhibit A for such a case. Here, in this album, we can hear many of the key ingredients of the music of Tangerine Dream, Kraftwerk, techno-rock, and various pockets of underground dance music and indie rock that followed. To their credit, Beck, the Beastie Boys, Stereolab and Portishead’s Geoff Barrow have all publicly acknowledged the influence of Silver Apples. 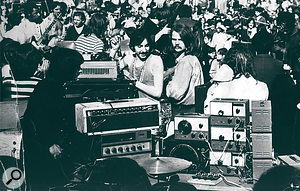 Heralded by John Lennon and Gary Booker of Procol Harum, and joined by Jimi Hendrix for jam sessions, Silver Apples appeared to have a future that looked interesting, if not particularly promising commercially.  Unfortunately, the actual longevity of Silver Apples was brief, even in rock-career years, as a result of the album cover content of their second LP, Contact, which shows the band in a PanAm cockpit with the PanAM logo clearly visible in the upper right on the front, and Simeon and Taylor sitting amidst the wreckage on the back cover perhaps humorously hinting they weren’t up to handling all the sophisticated electronics.  Ironically, the agent of their “crash and burn” was not due to any misuse of electronics, or lack of public recognition, but was solely due to that back album cover itself, which precipitated a lawsuit from Pan Am Airlines; though PanAm had had originally approved the group’s use of the Pan Am logo for the front cover, they were completely taken by surprise with the wreckage portrayed on the back cover. 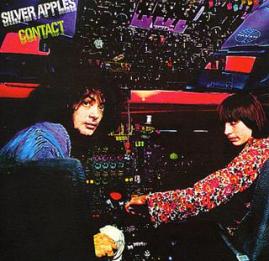 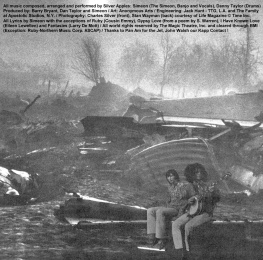 “They sued us, big‑time,” Simeon stated in a 2010 Sound on Sound interview.  “They sued Kapp Records, they sued us as a band, they sued us personally, they sued our management, they got some judge in New York to issue a cease‑and‑desist on us performing. All the records had to be taken off the shelves in all of the record stores. They put some sort of a lien on our equipment and they actually came to a club where we were playing and confiscated Danny’s drums. Fortunately, my stuff wasn’t there. That photograph led to the lawsuit that broke the band up. No record label would touch us from that point on. That was the end of Silver Apples.”

Let’s forget about this tragic demise for now (the band, like so many sixties band, have reunited for concert appearances), and celebrate the fiftieth anniversary of this influential and historical significant album.  It is rough in spots, with generally weak vocals, but there is no scarcity of interesting content — such content bookended by the strongest tracks, “Oscillations” and “Misty Mountain.”  Youtube audio doesn’t do this track justice, but still conveys that this music sounds more like a composition from the late seventies than the late sixties: 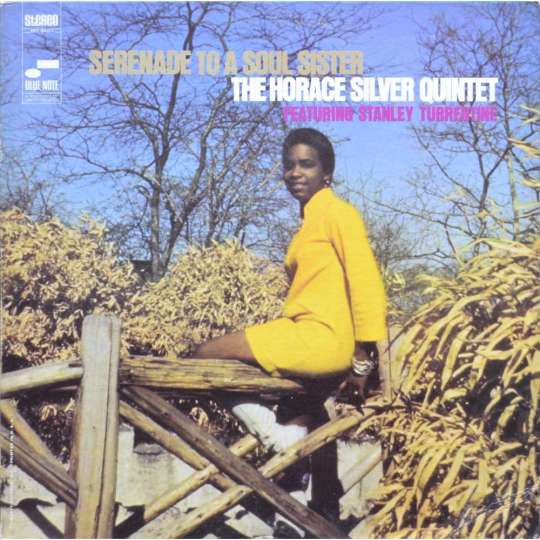 With a series of excellent albums on the Blue Note record label since he first signed with Blue Note in 1952, Horace Silver delivered another with Serenade for a Soul Sister released in early June 1968.

This is a high energy album, musically positive, with strong forward momentum; in addition, it conveys that special Blue Note quality captured in so many of the albums engineered by Rudy Van Gelder.  The first three tracks include Stanley Turrentine on tenor sax, sounding better than on his own 1968 album, “The Look of Love”, which is marred by overdubbed strings added into an otherwise surprisingly good performance of mostly contemporary pop tunes.  The very first track, “Psychedelic Sally” swings, bops, and rocks, brimming with a level of energy more commonly associated to electric guitars and electronic keyboards than a small acoustic jazz group.  The second and third tracks are in 3/4,  and the fourth track is in a fast 5/4 with a recurring syncopation between the second and third beats which extends its way with an added beat into a 6/4 bridge-like section that returns to the original theme followed by strong improvisation by Bennie Maupin, Charles Tolliver, and then Silver followed by the return of the ensemble.  The fifth track, “Kindred Spirits”, takes a slower and more casual tempo, and the last track, “Next Time I Fall in Love”, is a calm, relaxed, and somewhat carefree piano solo by Silver that nicely ends this upbeat and generally energetic album.

All compositions by Horace Silver.