Carpenters: Close To You

As a fifteen-year old, discovering near-death-of-the-universe rock like King Crimson’s first album and exploring any other early progressive rock I could find on the FM radio, it doesn’t seem a bit surprising to me that I paid little attention to any of the songs from the consummately well-arranged, and impeccably performed second Carpenter’s album.  Sometime around the end of my freshman year, the single “Close To Me” started climbing its way to number one, incessantly played on AM radio, followed by “We’ve Only Just Begun” taking off shortly after the start of my Sophmore year.  Repeatedly exposed to the latter on the bus ride to and from school, I couldn’t help but love the clever harmonic modulations and upbeat vocals. Later when visiting my cousins in Oregon, I even listened to the whole album on their father’s stereo.

Now fifty years later, at the age of sixty-five, and with a wife who grew up listening to and loving the Carpenters, I feel not the least shame in admitting my appreciation for this album, particularly when played on fine audio equipment, so much better than the sound of the school bus whining speakers or my uncle’s console nominal stereo system.

Born and raised in Connecticut, the Carpenters family moved to Downey, California in June 1963,  a few months before my family moved out of Downey to Orange County: Karen soon to start Downey High at the age of 14, with Richard eventually studying music at the relatively close state college in Long Beach.   When I later went to live in Downey a second time to shorten a commute to Los Angeles, I lived within walking distance of the pair of apartments named after those two hit singles from this second album, reminding me of how proud Downey was to have Richard and Karen Carpenter as their residents.

The first side, which includes both “Close to You” and “We’ve Only Just Begun” is the strongest side, but side two, with its original Richard Carpenter wistful ballad, “Crescent Noon”, is also worth repeated playing.  Throughout, Karen Carpenter’s voice is in top form with masterful shaping the phrasing and dynamics to support her lyrical interpretation.  I may not listen to this album often, but whenever I do, I am always glad I did.

Another one of my favorite vocalists from the seventies is Stevie Wonder, who continues his ascension to legend status with a transition album of sorts, as we see a balance between the interpretation of others’ music and including original compositions.  And though his composing still has a way to go, his vocals are consistently expressive and nuanced throughout the album.  And clearly, if there is a Stevie Wonder album from the 1970s you could omit from your collection with limited impact, this might be the one, it’s Wonder’s amazing vocals that would make you think twice about doing so.

I still remember when I first heard “A Question of Balance” at my next door neighbors in late 1970 or early 1971 when one of their friends had loaned them this album.  It is haunting and delicate, caressing and comforting, each track gracefully blending into the other except, of course, for the last track on each side. And though not a concept album, like the earlier “Days of Future Passed”, it has a concept feel, each individual track contributing to a unified experience. There is a good balance between acoustic and electric, a variety of vocal and timbral hues, and though none of the songs are essential music or particularly memorable, this is part of what provides the strength and consistency of the album as a whole. 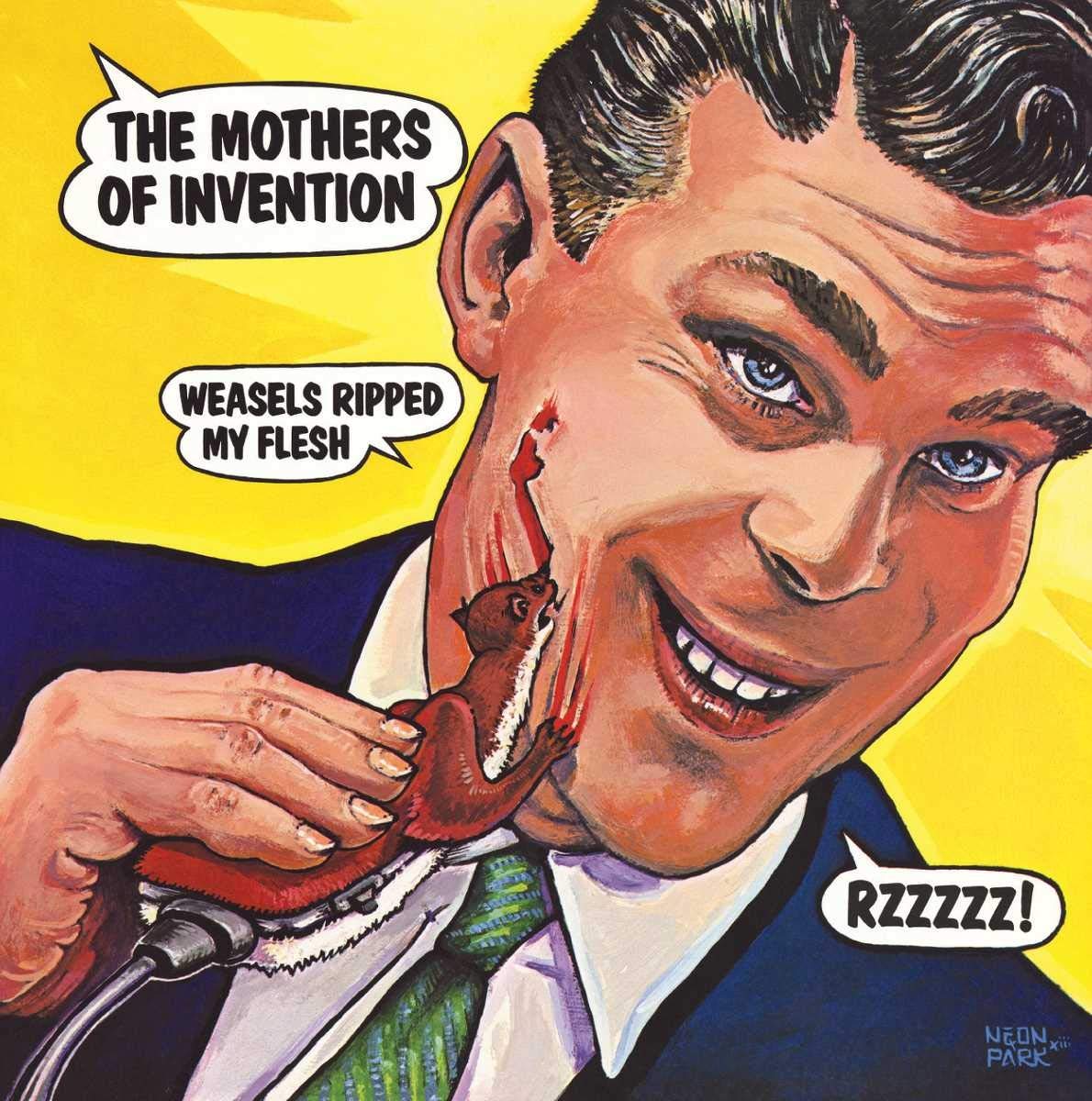 Frank Zappa and the Mothers of Invention: Weasels Ripped My Flesh

Whereas A Question of Balance is notable for its consistency, Frank Zappa and the Mother’s of Invention is more a smorgasbord of exotic dishes. Pieced together (after the band’s initial 1969 breakup) from both studio “vault” recordings and live concert recordings, the album successfully captures the wide spectrum of capabilities of Zappa and his musicians showing off the group’s mastery of mixed meter, wild improvisation, rock-and-roll (Little Richard’s “Directly from My Heart to You”) and Zappa’s extensive range of musical theatrics.  Though my first exposure to this was before much awareness of contemporary “classical” music of the mid-twentieth century or the free jazz of the 1960s, in later life I can hear how those influences are incorporated and re-presented with a fresh and simultaneously affectionate and irreverent spin — and although music no longer has to spin, like LP’s, tape reels, and CDs once did, this music still can have its own place in a modern listener’s musical rotation.

I am generally so much more interested in music than lyrics, that I often forget the importance of lyrics in the musical experience.  Marginally good lyrics are usually enough to work for any strong song, and particularly effective or revelatory lyrics will carry even the weakest musical material.

Musically, Sunflower is pretty impressive, but lyrically it is generally weak, particularly on the first side of the album. It is not particularly surprising that when Reprise released “Add Some Music” as a single in February of 1970, that AM disc jockeys were not particularly enamored to repeatedly play it.  It’s always a challenge to write a song about music itself, and the lyrics fell short of the promise of the music.  That along with a prevalent perception of the Beach Boys as an artifact of the sixties contributed to the song not rising past the 64th spot, despite Reprise pushing the single with retailers, which although resulted in it being the fastest selling single for the label, was just not enough. When the album was released later that year on August 31,  without exposure from AM radio for any given song, and without the album being deemed appropriately alternative or progressive enough by FM rock stations to get much airplay there, the demand was weak, and the sales were the worst for any Beach Boys album up to that time.   Good quality music was just not enough: without more relevant lyrics, less conventional material, or a more modern image for the group (which had even considered changing their name for that reason), the album was doomed to fail, and so it did, commercially.

Getting back to the balance between music and lyrics: the amazing thing about even weak lyrics is that eventually one accepts them if the music is good enough.  That is the case for side one of this album. Side two provides better lyrics, most touching upon unrequited love or ended relationships — and includes some of the best music of the album, with some strong contribution by Brian Wilson.   Perhaps lyrically, the most successful is the last song “Cool, Cool Water” since the door is left open to interpreting them past their face value, but one could argue that is a bit of a stretch.  All in all, this is not Robert Frost or Emily Dickenson (or Laura Nyro, Joni Mitchel or Leonard Cohen) and though the music is not in the same neighborhood as the last of the Beatles, or newer groups like King Crimson or Yes, it is delightful and bubbling, crisply fresh, and generally satisfying.

Released on August 16, 1970, Eric Clapton first solo album provides a variety of well-performed and well-written music, including a commercially succesful version of J.J. Cales “After Midnight.”   Artists on the album include Delaney and Bonnie, Leon Russell, Rita Coolidge,  and Stephen Stills who provides a guitar solo on “Let It Rain.”

The album shows off Eric Clapton skills as a songwriter with the beautiful heartfelt ballad, “Easy Now” of particular note.  If you are checking out this album for the first time since the 1970s, then the version to listen to is the 2006 Deluxe Edition which has the mix provided on the original album and an earlier Delaney mix as well as the original version of “Let it Rain”, different musically and with a different, perhaps more sexually-implicit set of lyrics, of a nature akin to those in “Easy Now.” The Deluxe album also includes a B-side of a Delaney and Bonnie (with Eric Clapton) single, “Groupie (Superstar)” which was later covered by the Carpenters as “Superstar”, and from the Delaney set of mixes, a more lively mix of “After Midnight” which from the opening brings in the horns that were somehow lost in the original mix.

It seems that starting in 1970, the most interesting album covers were a reliable indication of the most interesting bands.  And so it was in 1971, having started to learn about this correlation, that I spotted this above Hawkwind album with its sci-fi cover as the outermost album calling for my attention in the used bin of our local record store.  I picked it up, flipped it over, and found the back side as intriguing.  The fact of it having a song divided into a Part One and Part Two as well as other interesting looking content seemed to support taking a chance on a $1.99 price sticker and so I did — and so I had one of the earliest space rock albums, early on in the genre of space rock.

Although the first track is more traditional, things begin to get eerily spacey with the second track, which sounds like the background music to a suspenseful science fiction scene. This is followed by the repetitious “Be Yourself” which further establishes the space rock qualities of the album, and distinguishes its sound pallete and sound architecture from the closely-related contemporaneous post-sixties psychedelic rock genre.  “Paranoia Part One” is a simple repeated riff, similar to the “We Need Him Crucified” motif from the album Jesus Christ Superstar that was released a month or so later, and which dissolves with a sound mimicking the progressively slowing speed of a stopping turntable platter, and quite effectively, as I still vividly remember the surprise from almost fifty years ago that first time I heard this end of side one sound effect.

SIde Two continues with part two of Paranoid and a transformation of the original six note motif to one note, then two, replaced with the original six notes reclaiming their initial contour, slowing down again, but with no turntable ending sound effect.  The next track, “Bring It On Home”, lasting for 10:48 provides additional space-rock material and is followed by the more accessible “Mirror of Illusion”, providing symmetry to the album’s opening number.  One of the features of the best space rock is the sense of architecture and direction to the music, successfully pulled off here between the more traditional starting and ending tracks.  For many fans this first Hawkwind album is their best.