Launching the genre of progressive rock that is sometimes called Krautrock, German Space Rock, or perhaps most appropriately Kosmische Musik,  Monster Movie was recorded in July 1969 and released one month later in August of 1969.  It’s Kosmische Musik rhythmic drive is present on the very first track which opens up with a high pitch space age electronic lead-in (an effect later more prevalent after the introduction of electronic sequencers), followed by driving drums, and repetitive bass and electric guitar riffs — all elements refined further by later German “cosmic music” bands.  The seemingly anomalous vocalist, is American Malcom Mooney, who lends a ranting, free-spirt to the otherwise organized and precise forward driving sound of the band.

Keyboardist Irmin Schmidt and Danzig/Gdańsk-born bassist Holger Czukay studied composition with Karlheinz Stockhausen.  Drummer Jaki Liebezeit played with European Free Jazz proponent, Manfred Schoof and guitarist Michael Karoli had both classical (violin, cello) and jazz backgrounds. Vocalist and sculptor, Malcom Mooney, became friends with Irmin Schmidt and Holger Czukay shortly after he moved to Germany and joined the first iteration of the band named “Inner Space.”  It was Mooney who suggested a new name, “The Can”, which was later shortened to just “Can.”  At some point later, an English newspaper article incorrectly suggested that “CAN” stood for “Communism, Anarchism and Nihilism” and this was soon adopted by drummer Liebezeit.

There is certainly a sense of Anarchism and Nihilism in this first album, as well as a communal performance mindset.  There is also some great music, making this one of the classic rock albums of 1969.  The first track, “Father Cannot Yell”, not only has historic importance as early space rock, but exemplifies the cosmic, time-stretching intersection between space rock, free-jazz, and 1950 and 1960’s “experimental/avant/garde” “classical” music . The second track, “Mary, Mary So Contrary”, is pure West Coast psychedelia, sounding more Haight Ashbury than Köln, Germany. The third track breaks into punk territory and flirts with New Wave elements with Mooney as effective as any punk vocalist. The fourth track, “Yoo Doo Right” takes up the entire side two at a little over twenty minutes melding blues-rock with Stockhausen at the Kosmische Rock level with a little extra musical nihilism and proto-punk thrown in for good measure. All in all we have a very different album than the usual recorded fare of the time — music that is influenced by early Pink Floyd and Velvet Underground but also unquestionably provides its own influences for upcoming bands.

Those following this column may have noted my omission of MC5’s first released album, their live album, Kick Out the Jams.  I bought Kick Out the Jams as a used album around 1971 for about 50 cents but never took a liking to it.  I never much listened to another Michigan-based group, The  Stooges.  I have to say in all honesty,  I particularly made an effort to stay clear of them when Robert Hillburn, lead rock music critic for the Los Angeles Times, started to gush and effuse about them. Though there were many things Mr. Hilburn got right about music, he had an egregious blind spot, or deaf ear, when it came to progressive rock. Born in 1939, and enamored with the American Rock and Roll stars of the mid 1950s and seemingly more comfortable with the basics of rock and I-IV-V chord progressions than the more exploratory side of music, he absolutely hated progressive rock, and that was enough for me to discount his reviews from that point on.  When he unabashedly praised Iggy Pop and the Stooges for their primitive approach, while Hilburn was also trashing albums by Jethro Tull and Yes, that was enough for me to stop reading Hilburn’s reviews and lose any interest in ever listening to Iggy Pop or his “Stooges.”

However, this July, when looking over the calendar of albums released in August of 1969, I noticed that August 5, 1969, was the release of the first Stooges album.  I had listened once again to MC5’s “Kick Out the Jams” earlier this year in trying to decide if I would include that album in a February post for Fifty Year Friday, but it just didn’t spark my interest.  The music didn’t impress me and I didn’t even see more than a marginal connection between MC5 and later punk bands, a connection often emphasized by those examining the history of punk rock. For me, the most evident connection was a lack of instrumental skill.

So when I gave the first “The Stooges” album a spin, I expected little of interest.  And though the music didn’t send me into fits of musical pleasure, it had its moments.

The Stooges had basically five songs when Elektra (looking to expand their currently small cache of non-folk rock groups) signed The Stooges — partly based on input from MC5 regarding how loud The Stooges played.   For live performance, the group basically filled in extra time by jamming, but as this wouldn’t work for the album.  Iggy and the  Stooges assured Elektra they had more material, and then quickly, perhaps in a few hours, came up with four more numbers, three of which where included in the album on side two: “Real Cool Time”, “Not Right” and “Little Doll.”

The Stooges first album was generally panned by a wide range of critics.  Interestingly Robert Hilburn, avoided reviewing this first album. Another L.A. Times contributor, John Mendelssohn,  did,  and wrote the following: “Had I not the unpleasant experience of bearing [sic] The MC5’s “Kick Out the James” [sic] several months ago, I could say “The Stooges” was the worst rock album of the year. It’s unquestionably the second worst, featuring as it does several whiny, adolescently repulsive and barely distinguishable street-punk anthems and hypnotically boring 10 minute chant “We Will Fall.” (Sunday L.A. Times, December 7, 1969)

Note Mendelssohn’s prophetically uses “punk” in his review, a term that would soon be applied to marginally talented garage rock bands, and then later used for a specific style of music as performed by groups like the Sex Pistols and The Ramones.  One could make the case that the Stooges are truly a punk rock group, the first, as opposed to just being a loud, erratic, three-chord garage rock band like the MC5.  Not considering the Stooges lead singer’s live performance presence and antics, there are elements in this first album that reflect the ethos of punk rock as exemplified by tracks like “1969” and “I Wanna Be Your Dog”, a punk rock song title if there every was one.  Add to this that guitar work of Ron Asheton and a couple of actually interesting songs on the album (“Anne” and to a lesser degree “We Will Fall”) and we have something more here than an album that deserved to be widely dismissed by the rock critics of the time.  Supporting this contention is all the praise heaped upon this album in later years including the inclusion of this is the 185th best album of all time on the 2003 Rolling Stones “Greatest 500 Albums of All time.”  I won’t rate this as being one of the top 500 or even top 5000 albums of all time, but I wouldn’t say this is the second worst album of 1969 either. 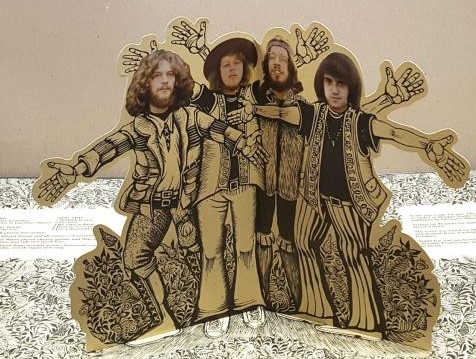 Released on 25 July 1969 in  the U.K. and in late September in the U.S., Stand Up is more than just an interesting document of the Jethro Tull transitioning from blues-rock to a folk-rock/hard-rock/progressive rock band, it is one of the finest gems of 1969 rock music.

I am generally not enthusiastic about the blues-rock genre, but this album starts off with one of the most exquisitely rendered blues-rock numbers of all time,  “A New Day Yesterday”. compellingly mixing harmonica, electric bass, electric guitar, percussion, and Ian Anderson’s vocals into fresh, vital, bass-punctuated pre-progressive rock music with a brief yet naturally placed flute solo in the middle — all of this in an under-three-minute track.

“Jeffrey Goes To Leicester Square” takes us into early folk-prog territory, simple chords with a colorful arrangement creating interest; this is followed by Anderson’s arrangement of Bach’s Bourrée from the E minor Lute suite, a track that got some air play on the then cutting-edge FM album oriented radio stations that were became more prominent with the early seventies.

There’s really not one weak track on this album.  More importantly, there are some real classics here, like “Look Into The Sun” and “We Used to Know.” Primary credit must be given to the song writing skills and arranging skills of Ian Anderson, but bassist Glen Cornick also contributed to the arrangements, as did, to a lesser extent, guitarist Martin Barre. Arranger, and later on, Jethro Tull keyboardist, David/Dee Palmer, student of Richard Rodney Bennett when student at the Royal Academy of Music, also contributed, and particularly shines in the strings included in “Reasons for Waiting.”