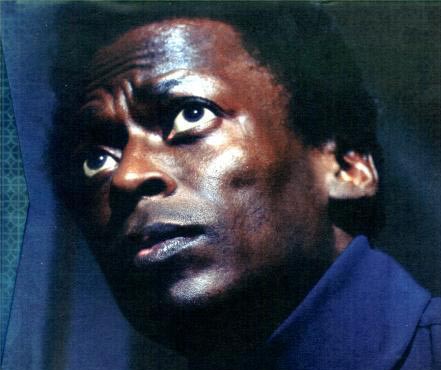 MILES DAVIS: IN A SILENT WAY

Recorded in one session on Feb 18, 1969 as three performances, “Shhh/Peaceful”, “In A Silent Way”, “It’s About That Time”, then edited by Ted Macero (with apparently minimal input from Miles Davis) into two compositions in ABA form, one for each side, In A Silent Way, was released on July 30, 1969, peaking at number 134 on Billboard’s Top LPs chart.  The music is available today in both the edited form, which for a long time was all that listeners were familiar with, and in its original form.

What is striking about either the edited or original form, is the original style of both the music and the musical approach to structure and form that was deployed.  The album version differs considerably than the original takes.  For “Shhh”/”Peaceful” the original starts off with a whole-tone sort of motif (with traces of the flat-second Dorian mode) on which the entire work unfolds.  There is this amazing guitar work from McLaughlin and a brief but luxuriantly melodic Davis/Shorter passage.  All of this is dropped from the album version, which begins with the initial statement of another theme from the original take (about ninety seconds) followed with the restatement of this theme that occurs during the last four and a half minutes of the original, then followed with earlier material.  Whereas the original is multi-thematic and provides more contrast, the album version is more mono-thematic and ambient in nature.  It is basically in A B A form, resembling the Sonata form found in Mozart, Haydn and Beethoven era music, with the middle section analogous to a development section.

On the second side of the album, Teo Maceo continues to aggressively edit the original music, once again creating an ABA structure by taking the group’s performance of Davis’s simplified version of Zawinul’s “In A Silent Way” for the A section and using Davis and Zawinul’s collaborative “It’s about That Time” as the B section.  The results provides us with an impressionistic A section, and a quasi-bluesy, slightly funky B section, with a perfect repeat (as it is just a copy) of the original A section.

Though a transitional style for Davis, this landmark ambient jazz album would have considerable influence on many styles of music in the next few years ranging from other jazz or jazz-ambient artists to a subset of progressive rock groups, particularly several of the so-called Kraut-rock bands including Can, Cluster, Tangerine Dream, Amon Duul II, to Brian Eno to a number of New Age artists to even several modern “classical music” composers.  It’s tempting to debate the artistic pros and cons and the artistic merit of the original music versus the final edited album, but it was that final edited album that was the sole source of this music for musicians and music lovers during the last five months of 1969, all of the seventies, the eighties and the nineties.   Commercial music is often notable for its externally enforced limitations, but in 1969 in particular, music markedly stood out for its bold exploration outside of established boundaries, with In A Silent Way being one of the best examples of music liberated and unencumbered from the realm of retail-driven mechanical patterns and formulas, purposefully, yet seemingly spontaneously, creating a new and unconfined expanse of musical expression. 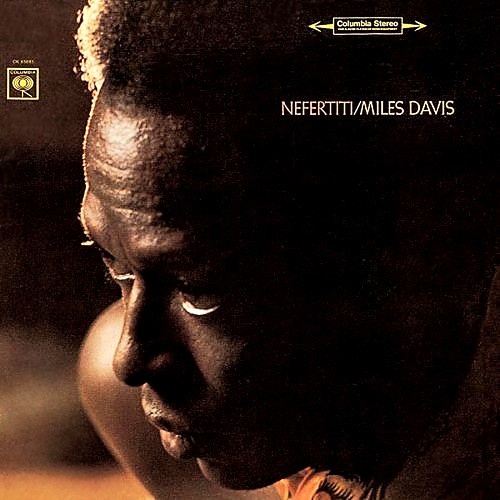 Recorded in June and July of 1967 and released, as best as I can determine, around February 1968, give or  take a month, Nefertiti is the ever-exploring, adventurous Miles Davis’s last all-acoustic instrument album. I also consider this one of the first albums to take significant steps into both Fusion and New Age territory.

Miles Davis time at Julliard is partially evident here (just as Tony Scott’s time at Julliard is partially evident in what some consider the very first New Age record, the 1964 album, Music for Zen Meditation.)  Miles seems to infuse Bartok and Satie, whose music he admired, into some of this work,  as well as possibly (this is maybe a reach on my part, based only on the nature of some of the rhythmic and melodic patterns) Olivier Messiaen.  Miles also drives his fellow musicians to further reaches of creativity producing a work like no other work recorded in 1967 or released in 1968.  Some call this free-bop, and there are elements of free jazz present, but overall this is generally an accessible album, very much a predecessor to the fusion jazz and progressive-jazz psychedelic/rock-impressionism that will soon follow in so many albums of the 1970s.

The title track, “Nefertiti”, recorded on June 7, 1967 as a single take, is named after the Egyptian queen, Neferneferuaten Nefertiti who, with her Pharoah husband, brought about a religious revolution in Egypt by narrowing religious worship from many gods to only one. And with this first track, “Nefertiti”, there is a singularity of focus.  Missing are solos from the trumpet and saxophone.  Instead, the two instruments blend into an ambient, cleverly crafted circular sonic stream (well done, Wayne Shorter!), much as when drifting into alternative realms of consciousness prior to sleep.  The piano, bass and drums provides the greater variety and commentary here, the entire work thoroughly and unapologetically breaking from the traditional be-bop approach to ensemble sections and solos.  We have a strong case for this being jazz minimalism despite the richness of material provided by Herbie Hancock, Ron Carter and Tony Williams, based on the foundational, hardly perceptible variations provided by Miles and Wayne Shorter.

“Fall”, “Pinocchio” (two takes) and “Riot” were recorded on July 19, 1967, two days after John Coltrane’s death.  This tragic and monumental event shapes the nature of the performances of these works, particularly Miles’ solos.  The other tracks on the Nefertiti album,”Hand Jive” and “Madness”, are more extroverted and were recorded on June 22 and June 23, respectively.  Though this album may not have been conceived as a whole work (the amazing “Water Babies”, the sharp-edged”Capricorn” and the reflective, surreal “Sweet Pea” [this last a perfect fit for the Nefertiti album] were also recorded during these sessions and released years later, in 1976),  it comes together nicely and provides a general mood of near-mystical introspection.  The performances by all members of the quartet border on mythical, with Miles inspiring and encouraging his fellow musicians in reaching further levels of excellence.

This a particularly subtle, perhaps initially elusive, album — one that many will not fall in love with on the first listening.  Not as accessible as the previous album, the 1967 Sorcerer, it is often considered to be more substantial: pushing jazz into an unexplored territory that soon becomes part of the language of not only jazz, but rock, fusion, progressive rock, new age, and late twentieth century classical music.   Darken the room and give Nefertiti your undivided attention when listening, if not already a devoted fan.

“The most important requirement of any poem is that it ends before the reader goes on to something else.” -- Zumwalt
Join 775 other followers