Fifty years ago, June 1970 was heralded in not with trumpets and trombones but with more intense screaming guitars and more repetitive and thunderous bass lines than any prior months of recorded history, whether on 78s, 33s, 45s or on magnetic tape. Yes, music would get louder, more emphatic, blusterous and even over-the-top annoying, but in June 1970,  the spigot of the fountain of the music of youth was opened up fully, the genie was released from the bottle mounted on a Harley fully armed with motivations and munitions, and the cat was not just let out of a bag, but fired from a cannon with its hair lit luminescently, waking up every previously recumbent, sleeping, and partly hypnagogic dog in the neighborhood.

The world would only be given a few more months of Jimi Hendrix, and though no single guitarist would ever match his originality and creative capabilities, the sheer volume of those stepping into the electric-music colosseum, both in headcount and decibels, would be enough to more than measurably tip the direction of the hardest and heaviest rock onward and forward.

On the very first track of Deep Purple in Rock (released on June 5th, 1970), “Speed King”, Ritchie Blackmore announces his addition to the up-to-that point comparatively staid Deep Purple, with such pitch-altering pyrotechnics that he effectively shames much of the previous decade’s incarnation of so-called mind-expanding and psychedelic music into permanent hiding with a similar level of effectivenss as computer-aided animation upstaging the assembly-line Hanna Barbara animation of the sixties. With organ, bass and drums added, the texture is as dark and thick as a Wagner full-ensemble scene stuck in an endless feedback tape loop.  Quickly this dissolves into an introspective church-like Jon Lord Organ solo with any delicacy hinted at immediately crushed by reentry of guitar, bass, drums and Ian Gillain’s banshee-styled vocals.   Amazingly,  this landmark instrumental intro was ommitted from the U.S. release of the album, victim of corporate-influenced editing.

And so with the release of this decidedly different hard rock album, Deep Purple had indisputedly arrived.  After three fine studio albums of  Lord and Blackmore exploring all styles of music within and on the borders of their capabilities, the addition of Ian Pace and Roger Glover focuses their talents to a distinctly, more blues-based, hard rock sound, influenced by Cream, Led Zeppelin and even Chuck Berry and King Crimson at the extreme —  but very distinctive and recognizable as what would soon be readily identified as the Deep Purple sound. 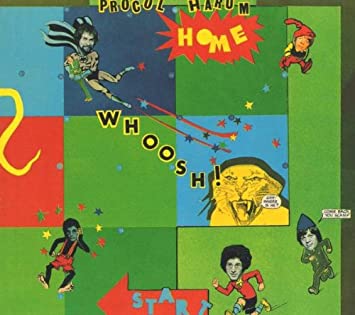 Procol Harum (now minus Matthew Fisher) also released their fourth studio album on June 5th, 1970.  The album is a bit uneven starting off with the bluesy “Whisky Train” before getting to the more substantial, more evocative and more representative “Dead Man’s Dream.” Side two is much better with the first three tracks being commendably representative of that dark, dense Procol Harum sound that makes them so special.

Uriah Heep’s debut album like so many debut albums seems to be a document of the band searching for their sound.  We hear influences of King Crimson’s “21st Century Schizoid Man” and Black Sabbath’s oblique foundational bass lines, as well as the trademark Uriah Heep non-lexical vocables (in other words, without words: wordless vocalizing like “oohs” and “aaahs”) and their love of riff-based repetition. This would be the first of their many albums that the critics loved to hate, but one cannot deny the creativity of the participants.   Though the lead guitarist, Mick Box, is rarely mentioned alongside peers like Ritchie Blackmore or Robin Trower, he should be — as I do so right here in this blog post, and most specifically, this sentence.

Barclary James Harvest, assembled their name from paper slips drawn at random. Fortunately more care went into the music, with this, their very first album, released June 5, 1970, bountiful in melodically rich, almost Beatlesque (McCartney-like) material.  The last track appears to have taken a cue from Moody Blues with its recited poetry intro and orchestral content, but it goes deeper and heavier with a dark metallic hue along parallel lines at places to King Crimson’s “Epitaph.”