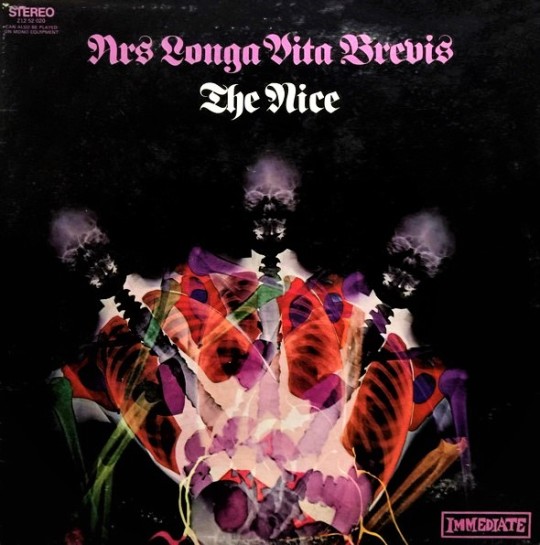 In November of 1968, The Nice release their second album, furthering their advance into progressive rock as initiated in their first album.

With the guitarist, David O’List, no longer part of the group (either dropped from the group or left on his own depending on whose side of the story is being represented), The Nice auditioned replacement guitarists, including Steve Howe.  Evidently this would have worked out, except for Howe having second thoughts a week later.  And so, the band moved on without a replacement guitarist, with a line up more like a traditional piano jazz trio (piano, bass and drums), then a rock group, providing the blueprint for the keyboard-dominated progressive rock group (with occasional augmentation by orchestra as in the case with this second Nice album.)

The first track, “Daddy, Where Did I Come From”,  seems like a throwaway novelty number, but much like the ensuing second and third tracks, has a distinct charm and quirkiness that elevates it above the commonplace. Note the peppy piano intro by Keith Emerson as well as the brief baroque-like organ passage, the ensuing unbridled electric organ accompaniment, and the spoken dialogue as the dad.

The second track, “Little Arabella” includes vocals from Keith Emerson at around the 1:37 mark. The third track, the fanfare-like”Happy Freuds”, has Keith on lead vocals and though mostly a simple upbeat pop number, has both charm and substance.

Keith Emerson’s dominance continues with the keyboard-dominated realization of Sibelius’s Intermezzo from the Karelia Suite.  The main theme works better in its original version, but Emerson’s improvisation and development of the theme — and short detour from the theme — provide the essence of this interpretation.

The title track takes up the length of the second side, including orchestra backup — at least at points.  It is not so much a coherent whole as a stitchwork that includes a dramatic Keith Emerson prelude orchestrated by Robert Stewart, a four minute drum solo, the main “Ars Longa Vita Brevis” theme with Jackson on vocals,  followed by a jazzy instrumental diversion, a third section with an Emerson intro that dives into the first movement of Bach’s Brandenburg, pitting Emerson’s more excursive inclinations against the orchestra’s more faithful script,  followed by a restatement of the “Ars Longa Vita Brevis” theme with more jazz-like trio work and the prelude material serving as a coda.

All in all a pretty good album that delivers quality, variety and some impressive trio passages.

All songs written by Keith Emerson and Lee Jackson, except where noted.