I am having second thoughts about posting these album reviews of music of 1967 — fifty years ago.

One: it’s not easy to write reviews about music: to describe music in words is an impossible activity, and at best one ends up describing their reactions to the music, which, really, is self-centered, possibly narcissistic, and either self-indulgent or masochistic (writing music reviews can be very painful as one recognizes that keystrokes being captured by WordPress fall immeasurably short of the sound waves that are captured by audio recording devices.)

Two: shouldn’t I be writing about recent album releases? To write reviews about albums already accepted as established classics doesn’t help generate income for the musicians (if they are still alive), encourage them to create more music, or provide the service of bringing  previously ignored music or musicians to people’s attention.

Three: there are others out there writing music reviews that get less visitors than this blog, and yet their reviews are better, more interesting and more informative. When I have visited such blogs, I am shocked to see posts that range from being hours old to months old without a single like or comment.  What keeps them going?

And so I take the time to ask myself, am I providing anything of value to my reader or, if not to my reader, is there anything that I get out of this?  And I really don’t know at this point if any single one of my reviews has caused someone to listen to music they would otherwise have missed out on.  But I do know, once I take the time to reflect on it, that I do get something out all of this: knowing that I need to write something, I am listening to this music differently than I normally would. I am not only listening intently, but with the need to find something I can communicate out to someone else.

During much of my regular music listening, I listen seriously, and I direct my attention directly on the music. I am seated.  I am not dancing, driving, cooking, or watching sports with the sound turned down.  I am a human receiver, trying to absorb and enjoy as much of the music as possible. When I listen to music I am planning to write about, I am no longer in receiver mode, but in explorer mode.  I am looking for places to pitch a tent, clues for sources of water, tracks of game in the vicinity, evidence of past occupants or current inhabitants.  I am reaching out, straining my eyes to see the distance, taking notes mentally; I normally don’t do any of these things when I am listening for enjoyment.

And so knowing that I must write about what I am listening to changes the listening experience.  If it is a digital source, I might even pause, rewind and replay. I find myself looking for strengths and weaknesses in the music instead of taking it on it’s own terms. It’s like the difference between dating someone for the enjoyment of their company and dating to determine an appropriate life partner.

And there is the selection of material.  When I listen for enjoyment, I pick something I am in the mood for, or something I just bought, or something that will provide a unique experience.  When I am writing a post about one of the best albums of 1967, the selection process is limited to that year, and I have to find something that is pretty good and that others will enjoy.  When listening, I ask myself, is this album good enough to mention as a “Fifty Year Friday” album, and if the answer is no, the album has served it’s purpose as a candidate and either I tolerantly listen to the end, or I stop and put on something else.

And to select an album, I review all potential choices: albums in my collection I have heard dozens of times, both as an dedicated listener and as background to other activities, as well as albums that I purchased, and never played — or played the first track — or continued past the first track but made secondary while reading liner notes, reading a book, or doing something else.

And so we come to this Velvet Underground album. I know this is a good group: a very important group in its place in the history of music.  And I was a fan of Lou Reed’s “Transformer” album, at least marginally, having heard it a few times in 1973 and 1974. And so, back in the early 1990’s, when I would buy a few dozen CDs every month, mostly jazz and classical, I saw this in the local mega-bookstore bin,  and not having a single Velvet Undergound CD, and knowing this was supposedly a good one, I immediately bought  it with a few dozen other CDs.  When I got home, this CD had to compete with a previously purchased 18 CD set of Nat King Cole, a Chet Baker CD, the complete Bill Holiday on Verve, a 6 CD T-Bone Walker set, a Captain Beefheart CD and several new classical CDs. Neither the Velvet Underground nor the Captain Beefheart won  me over after the first couple of tracks, so I set them aside, meaning to listen to them soon, but never doing so.

But now, in 2017, looking for worthwhile albums from 1967, I select this previously neglected CD, and listen to it with full attention. And to my surprise, it is a musical treasure.

If Sgt. Pepper’s is the first example of progressive rock, “The Velvet Underground & Nico” is the first example of Art-Rock, at least that I know of.  I am not always a fan of so-called Art Rock — it can get on my nerves, but like the genre, free-jazz, when it is done right, it is great — when it is just an excuse for lack of structure, vision, content, it is like so much of the so-called classical “Avant-Garde” (neither classical or particularly innovative) of the 1950’s, 1960’s and 1970’s — a waste of valuable listening time.

This album, though, has direction, intensity, texture, form, structure.  There is a sense that there is a canvas with dimensions in space and time that is being systematically addressed with points, dabs, strokes, shades, groupings and contrasts.

“Sunday Morning” is the last song recorded for the album, but it makes sense for it to open the album as it is most accessible and apparently disarmingly innocent of all the songs.  The celesta provides a music-box like introduction, to a peaceful, tranquil tune with lyrics that belie the musical serenity:

This is a song that could have gotten substantial airplay.  Perhaps it didn’t due to the contrast between the pleasantly serene melody and the disheartening lyrics. Perhaps it didn’t because of Lou Reed’s distinct half-spoken and sometimes imperfect intonation. Or perhaps there were commercial reasons or lack of the necessary behind-the-scenes connections.

The musically bucolic first track is contrasted with a rough, repetitive, blues based “Waiting for the Man.” The lyrics are again bleak, portraying a New York City heroin addict, looking to score from his dealer.

Since music is generally my main focus, let’s get the lyrics out of way.  Lou Reed’s writing is direct, brutally honest, and of its time.  These are not the clever, playful, roundabout lyrics we find in most of the more socially-relevant music of the time. This is a much more accurate, even painful, representation of reality.  Lou Reed connects with life’s realities  rather than just observes or comments on life:

“Hey, white boy, what you doin’ uptown?
Hey, white boy, you chasin’ our women around?
Oh pardon me sir, it’s the furthest from my mind
I’m just lookin’ for a dear, dear friend of mine
I’m waiting for my man”

The music here is frantic, with hints of barrelhouse piano transformed into a pounding commentary on withdrawal and drug dependency.  This is not pleasant music.   This is musical drama.

Lou Reed is sometimes flat, and occasionally here or there sharp, but, thankfully, he wavers more like a gymnast maintaining equilibrium on the balance beam, his pitch violations compensated by his confident and appropriate delivery of the text which unfailingly communicates the intrinsic meaning and essence inherent in the words. Not the case with Nico.  At the insistence of Andy Warhol, Nico was added to the band to perform lead vocals on a few of the tracks as well as some backing vocals.  On the third track of the album, the wistful ballad, “Femme Fatale”, the combination of being out of tune and lack of consistent expression erode her voice’s timbral strengths inviting one to consider how much better the album would have been with Lou Reed replacing her lead vocal assignments.

It is with “Venus in Furs” that this album takes off into another musical sphere.  Not only is the focus on the substance, with a given mood and direction deftly and often roughly crafted for each track, but we get a range of music styles — some of that immediate time period and some hinting at the near future.

One can identify the influences in this album: Bob Dylan, blues, rock and roll, rhythm and blues, free jazz (Lou was a fan of Cecil Taylor), classical avant garde, modernism and experimental music (Cale studied with Humphrey Searle, and after coming to the U.S, had ties to Iannis Xenakis, John Cage and La Monte Young), British Invasion, British Skiffle, Indian and eastern music (note the drone and guitar in “Venus in Furs”), and possibly the New York Hypnotic School.  More to the point are the many hints and foreshadowings of future styles of music including minimalism, psychedelic, glam rock, art rock, progressive rock, punk, goth, and grunge.  I will take bets on Velvet Underground having influenced Peter Hamill, David Bowie, PJ Harvey and groups like the Residents (at least a little), Explosions in the Sky, Sex Pistols, Joy Division, U2, Sonic Youth, Talking Heads, Nick Cave and the Bad Seeds, R.E.M. and countless others.

All tracks written by Lou Reed except where noted.

On the original album:

For those that want to hear additional Lou Reed compositions from this time period, they can listen to “Chelsea Girl”, Nico’s solo album recorded in 1966 after “Velvet Underground & Nico”, and released in October 1967. The name of the album is a reference to Andy Warhol‘s 1966 film Chelsea Girls, in which Nico starred and includes a Lou Read composition of that same name. Besides Lou Reed, John Cale and Sterling Morrison making contributions, we also get two Jackson Browne compositions and his guitar on five of the tracks. Jackson Browne was providing back up for Nico’s small venue performances in 1966, and romantically involved with her until 1968.

Nico’s vocals are slightly better than on the Velvet Underground album, but there are still serious problems with pitch and in providing appropriate emotional delivery of the lyrics.  The string arrangements, instrumental backing, and strength of the compositions help alleviate some of Nico’s performance shortcomings. 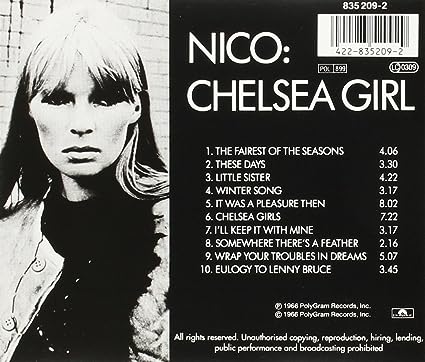